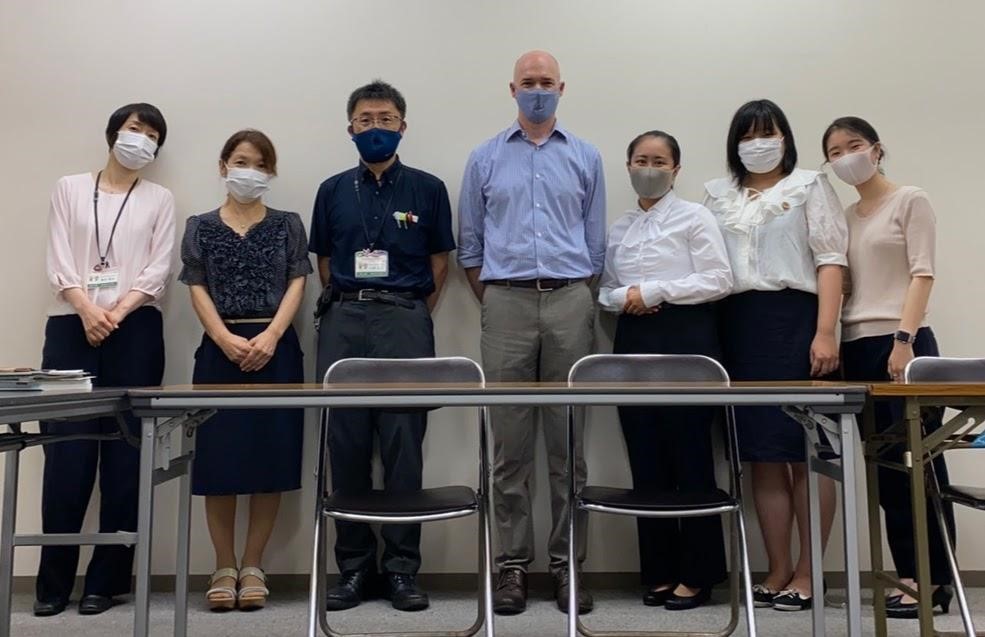 Followers of this blog may recall that in July 2020, a group of sixteen students participating in the spring Model UN class launched a local Gender Equality Project after attending the Japanese University English Model United Nations (JUEMUN), where they discussed issues surrounding Gender Equality for Working Women around the world. These sixteen students formed four committees to research and find solutions to issues surrounding: 1) sexual harassment, 2) working mothers, 3) women with disabilities, and 4) promoting women leaders.

Last December, they actually took eight pages of written recommendations to members of the committee for Gender Equality in Okayama Prefecture. There they had a very interesting discussion and it seemed that the project was finally complete. But three of the original members continued corresponding with the Okayama Prefectural staff to see if their ideas had actually been adopted. Below is a reflection by one of those students, Miho Kaizaki, who along with Maya Fujii and Mari Ueno (both now Seishin graduates) visited with the Gender Equality staff at Okayama Prefecture back in July.

Why did you participate in this Gender Equality project?

I participated in JUEMUN in 2020. We focused on gender equality issues on a global level, so I wanted to investigate them on a local level. Therefore, I took part in the Gender Equality project, and, in December 2020, I attended a meeting to exchange views with Okayama Prefecture staff in order to reflect our opinions in the 第５次おかやまウィズプラン, which are the guidelines for gender equal society in the Prefecture. I also attended a follow-up briefing session by the Prefectural staff on the 26th of July, along with my Seishin Seniors, Mari Ueno and Maya Fuji, and Professor Tom Fast, to see if any of our recommendations from December had been adopted by the Prefecture, and what gender issues are still a problem in Okayama.

What impressed you about the meeting?

There were two things. First, I was glad to see that our opinions had been included in the 第５次おかやまウィズプラン. I had been especially concerned about working mothers’ problems, and suggested promoting remote work, and educational workshops for employers, particularly those who are in management positions, in order to create an environment to keep a good balance between work and childcare. I hope these ideas will spread more from now on.

Second, I realized that there is a discrepancy between knowledge and practice about gender equality. At Seishin, we students have spent our school life with relatively fair treatment with regard to gender, thus many of us don’t discover the real gender gap in Japan until after we enter society. In fact, according to the Global Gender Gap Report 2021, the gap between men and women in Japanese educational attainment is minimal with a 98.3% achievement rate (100% expresses perfect equality). However, in the work world, after marriage and childbirth, sexual division appears. Women and mothers’ burden of housework and childcare increases dramatically. As a result, they cannot aim for management positions in their companies and may even be forced to quit.

Through the follow up meeting at Okayama Prefecture in July, I found that there are two main factors which contribute to this inequality: long working hours and what we learn from our own parents. Japanese fathers understand the hardship of housework and childcare, but they don't have enough time to help with it due to overwork. In addition, we have grown up seeing fathers who work at companies and mothers who do domestic work, so it is difficult to change our consciousness about the sexual division of labor. Thus nothing changes. To solve this problem, I think we need to promote Work Style Reform (働き方改革) more actively. We should think more about the work of husbands and wives in order not to divide the work but share it. We need more time at home to share housework. Companies also need to be more flexible and create ways for people to work more efficiently through remote work and so on. I hope the 第５次おかやまウィズプラン will help us to create a more comfortable life for all people.

What do you think about this meeting?

It made me realize I should take actions to improve global and local problems. In this case, I could learn what problems happen and how to solve them, then spread this information to other people. Okayama Prefecture has many resources for dealing with gender equality issues such as the With Center and a call service. I will not only make use of them for myself, but also recommend them to many people.